From Vaudeville to Voiceover 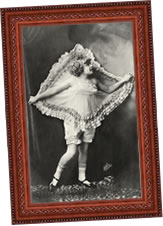 The last time I saw my grandmother, she tap-danced for me. She was 76 years old. Not only was I astounded that she could still tap dance, I was amazed that she remembered how. Tap dancing was something she had learned as a child performer in Vaudeville.

While Grandma Robley knew a thing or two about entertaining, it was her cousin, “La Petite Elva,” who was the real headliner in the Vaudeville circuit. To hear the newspapers tell it, she won over audiences everywhere she went:

La Petite Elva, although only about twelve years young, is a real little singing comedienne with a strong voice and knows how to put over a song, also possessing quite some showmanship. She was the hit of the show by a big margin. –Variety, October 1917

Growing up, I always wanted to be a performer. I would fantasize about what an exciting life Elva must have led, traveling across the country as a young girl in the early 1900s. I still feel inspired by the show pictures that our family has kept for nearly a century — the photos of the “captivating, curly-haired, dimple-cheeked child with a beautiful, cultured voice.”

I know now that the reality of life on the circuit was not so romantic. Elva died from tuberculosis at the age of 15, likely from spending so much time on trains and in damp, dark theaters. But I’m grateful that the women in my family were strong-willed and independent, particularly for the time in which they lived. Elva’s legacy, and my grandmother, instilled in me a love of acting and directly influenced my choice of profession. If I can pass on their legacy of fierce independence and passion to my own children, I believe I’ll have done a good thing.